A bucket of thorns 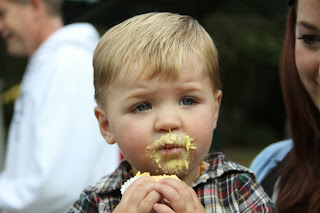 Enjoying a cupcake at a party.

This day was the result of having too many things to do in one day. Realistically we had more than we could possibly do. Then all sorts of little things went wrong as the day progressed... things not worth mentioning.

The worst thing that happened involved little Miss Hailey. I am super careful with the kids outside - I watch them like a hawk because I am paranoid they are going to run in the street and get run over by cars. Hailey is pretty good - she knows that before she can cross the street she has to give me the "ticket" (her hand). Usually is it Evan who gives me a run for my money. Anyways, we were in a busy parking lot. I told Steve to grab Hailey's hand as she got out of the car, but then out of nowhere she bolted and Steve couldn't grab her. She ran right in front of a large moving SUV. I thought the car had hit her, probably because she is so short. The car did not hit her, but because I thought it did I went ballistic... for real.


I should have been glad Hailey walked away without a scratch. I should have given her a hug and talked to her. Instead I chewed her out so bad (really really bad) she could barely breath between all those sobs. She was definitely more scared of me than the car. Honestly nothing good came of chewing her out like that. I felt terrible afterwards, probably because that is a terrible way to handle the situation. It is just a reminder to me that I need to learn to control my temper better. Just because bad things happen, that does not justify bad behavior.

That evening when we finally arrived home I bailed out of the last event of the day. I was in such a horrible, bad mood and burnt out I decided if things not done that needed our attention. We were supposed to go up to Northridge with our Turkish neighbors to a special dinner event that takes place once a year where they are able to bring their non-Muslim friends. They had to make special reservations to bring us. It would have been an all-nighter for us. They were super nice when I explained all the things that had gone wrong and why we couldn't go. They even offered me a bottle of wine though they know we don't drink. (I am so glad they didn't chew me out). These are some of the best neighbors we have ever had. One bad day is all it takes to make me realize that it is better to space out the things that we would like to do rather than cram them in too short an amount of time.
Posted by Steven at 12:19 PM