Toothbrush in the Tub. 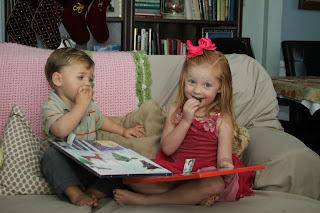 A chocolate a day from the advent calendar. 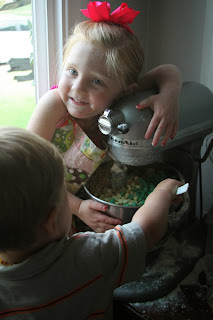 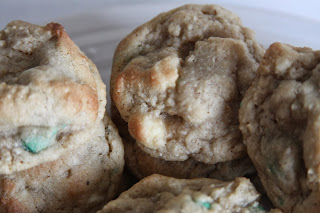 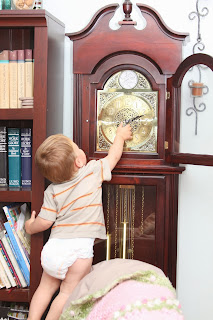 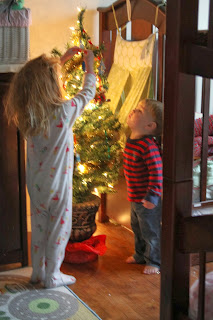 Every year we put a small tree in the kids room. We could only decorate the top half of the tree in the living room because Evan wants to launch ornaments off the tree like they are grenades.  I am just waiting for him to knock the whole tree over. He likes to whack the tree with the light saber... hence all the fancy ornaments are packed away for safe keeping in the garage. 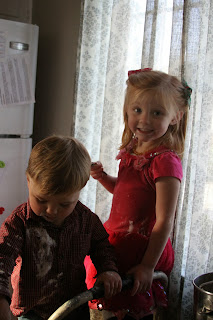 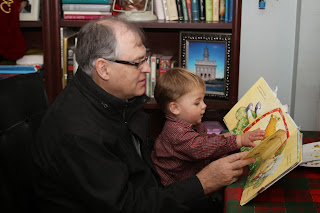 Reading after dinner with Grandpa Ashcraft. 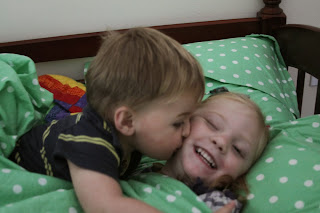 Playing on the top bunk bed 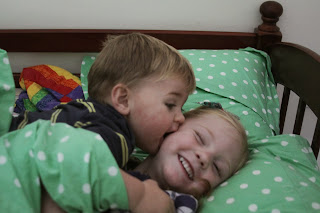 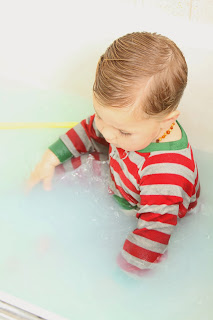 My patience has a limit. It wasn't Hailey's full glass of milk Evan threw off the table and smashed into a million glass shards that made me mad. Though it would have been nice if he had broken it before I had decided to mop the floors instead of after. It wasn't the bucket of sand Hailey  brought inside and  put on the couch while she ran to the bathroom which Evan dumped out on the couch and floor that got to me. It wasn't even the two loads of laundry I folded and left on my bed, only to find it thrown on the floor with all my bedding, while I helped my brother install a new facet. Or that fact that those two rascals got on top of the washer into the cupboards and threw all my canned items on the tile floor while screaming "bombs away!" As Evan threw his entire dinner on the floor I told my  mom  sitting across from me, "it can't get any worse, there is nothing left for those two to do."

That night we had a Christmas party to go to. Were were supposed to have left 30 minutes ago. I threw those two in the tub. I got Evan out and dressed in his pajamas. I put Evan  in his room to play, told Hailey to call me when the water was done draining. I went  in my room to put on a clean shirt and fix my makeup. I heard those two laughing, I thought to myself, well at least they are not crying. I went to get Hailey out of the tub and low and behold his Majesty was in the tub, fully dressed in his pajamas. There was a broom in the tub. All of the toothbrushes were in the tub too. Evan always pees in the tub without fail.And there was my toothbrush floating in that pee water. There was plenty of laughter until they saw my face. It is what my own mother calls the W.W.W. face. The wicked witch of the west face...and it's not pretty.  It is times like this I tell myself,"Ok, if I can think of just one reason why I should love my children I will keep them...I only need one reason."  It was only 6:30 p.m. I had another 2/12 hours before Steve would get home from work. I made sure to tell him he was lucky they were both alive and breathing.

How is Steve doing? Steve liked working on the Disney  Show, but he seems to like this new job even better. When Steve was thinking about accepting this new job, the company posted an ad online for a senior animator, just to have their bases covered should Steve decline the offer. They had over 200 people apply for the job including some of Steve's friends. Many of Steve's friends have struggled to stay afloat in this industry.We try to be grateful for what we have & recognize the constant hand of God in our lives. 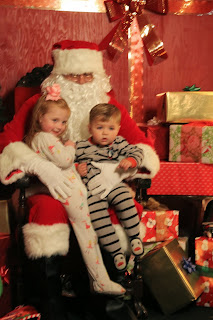 Santa arrived at the party in a lovely red corvette.

Posted by The McClellan Clan at 11:18 PM