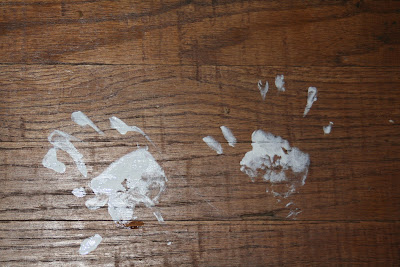 I decided I wanted to replace the red paint in my dinning room with something a little calmer. Steve had a Stake Priesthood meeting to attend and I asked my sisters to watch Hailey, but they were already busy. They were kind enough to watch her on a Thursday so Steve and I could attend Stake Temple night. I didn't even finish putting the primer on the red paint before I saw little white hand prints everywhere. I know.... why couldn't she just play with some of her toys right? After the fifth time I washed the paint off Hailey I called my busy mom and recruited her to have some special one on one Hailey time with her cute little granddaughter. Did I mention that Hailey figured out how to pull off the blue painters tape? 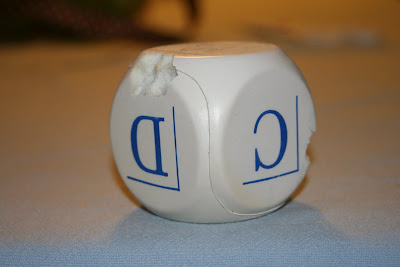 Steve gave Hailey this block to play with that he picked up at the Otis Senior Show. Then he left her alone for a few minutes. Then she began to take big bites out of the block like a mouse on cheese. I have also caught her in the act of chewing on Steve's computer cables and cords. It appears we will be getting a computer armoire with doors real soon. 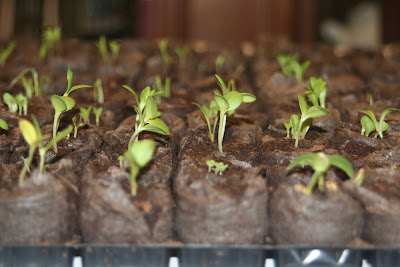 A couple of weeks ago we planted 142 pellets with vegetable, herb, and flower seeds. We even planted some pumpkin seeds that we got from Greg's (Steve's brother) humongous Halloween pumpkin. Hailey likes the spouting seeds; she likes to rip them right out of the dirt and eat them. Then she wants to throw them on the ground and smash them. All that work to get them to sprout and poof! before you know it they are gone. We have had a few casualties since they have sprouted. She even decapitated a few with the trowel she found outside. 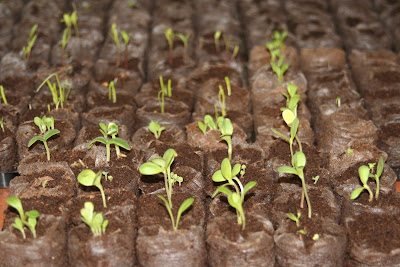 Today I started wrapping birthday presents for Hailey. Of course she wanted to grab them and rip the tissue paper right off. I tried to shoo her away but later I noticed that it was too quiet and came to find she had gotten into the bathroom trash and trailed trash all over the house. My house is such a mess I wasn't even really sure where to look for Hailey, but I found her... she was chewing on a empty bottle of hair spray I had thrown out earlier. I am convinced it is a good thing she only has 4 teeth. Imagine the damage that will come when she has all her teeth!
Posted by The McClellan Clan at 8:10 PM